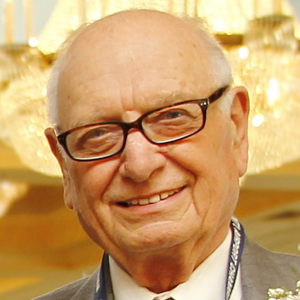 Rudy Auslander was born in Fairbanks, Alaska and attended the University of Alaska. His long career was in aviation. One might think that he would have been dissuaded from this course by a small aircraft crash in the wilds of Alaska that left him for 10 hours in -40 degree weather before the dogsleds found him, but not so! He went on and eventually became the president of Japan Airlines, overseeing the company’s operations in the United States. He speaks fluent Japanese. Rudy continued in the industry after retirement as the executive director of the John F. Kennedy Airport Chamber of Commerce. Rudy Auslander became involved in Deaf education when the Lord gave him a Deaf daughter. She attended Mill Neck Manor Lutheran School in Long Island, NY. While she was a student there, Rudy became a trustee. He served the Mill Neck school for over 50 years in various capacities.

In 2019 Rudy retired as chairman of the board for the Mill Neck Family of Organizations. During his time at Mill Neck, Mr. Auslander had some noted accomplishments, including overseeing the building design and construction of the new school that was built in the 1990s. In that project, Rudy worked with Gallaudet University to design an auditorium especially matched for the visual needs of Deaf children. The auditorium was named after him on the occasion of his 80th birthday in 2015.  A backlit etched image of him hangs in the lobby to honor him for his lifetime of service to the Deaf community. Rudy Auslander has been a tireless advocate for Deaf people, their education and rights. His motto remains, ‘By the Deaf, for the Deaf and with the Deaf.’